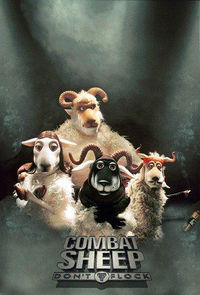 Combat Sheep is a half-hour comedy telemovie about a group of anthropomorphic sheep who have to deal with life as ex-armed service mascots.

The ovine characters in Combat Sheep are brought to life using puppetry, and are:

The main recurring human character in the story is Detective Inspector Hindle, a quick-tempered police officer whom the sheep repeatedly make look a fool.

Combat Sheep begins with snippets of a BBC Breakfast News report about the mental abilities of sheep, indicating that they "we might have been underestimating their intelligence all along". The rest of the story is narrated by a voice-over from Harris, an army mascot, who is first seen proudly looking at portraits of his sheep ancestors who have been involved in the military. It is just before Christmas, and, just after being awarded a Distinguished Service Order medal, Harris is informed that he has been made redundant due to military cutbacks.

Harris tries - and fails - to find new employment, even trying for menial jobs, but he is cheered up upon seeing a newspaper advertisement for an ex-army reunion. At the reunion, he seeks out the mascot section, and recognises Peaches, "the most physically accomplished mascot in the British Army", who is now reduced to handing out name badges.

Peaches laments how they have gone down in the world, but declares that she and Harris are "the lucky ones" compared to Moose, a brawny but especially dim-witted sheep they both knew. Harris and Peaches track down Moose and find him appearing in a Nativity play, believing himself to be a successful actor despite the facts that he has to fake playbills to give his part prominence, and his dressing room is a gent's lavatory. During the play, Moose appears on stage drunk and rants at the audience before unsuccessfully trying to shoot himself in the head

Moose is arrested for firearms possession, and interrogated at New Scotland Yard by Detective Inspector Hindle. Harris and Peaches help him escape, distracting Hindle by telling him Charlie's Angels have just walked past.

The three sheep retire to a coffee shop. Flipping through a photo album and reliving memories, they come across photographs of Cooper, "probably the slackest mascot in military history" who had "retained a position in the RAF despite being an American and making a number of embarrassing gaffs in fly-on-the-wall documentaries".

Harris, Peaches, and Moose look for Cooper, and find him working as a commercial co-pilot, due to lax hiring standards. Cooper's incompetence leads to a New York-bound 747 landing in Salford and gettings its wheels stolen. Like Moose before him, Cooper is questioned by DI Hindle, and the other sheep help him get away by pretending Bryan Adams has just gone by.

The four sheep gather in the coffee shop and consider where their common traits - army, redundant, sheep - logically lead them, and Moose concludes "a Queen tribute band". This falls apart when they realise none of them can play any instrument other than the bass guitar. Soon after, a ticking package arrives for Harris, who is distraught to find it contains an alarm clock; he ordered some deluxe Gainsborough Christmas Crackers that came with the promise of one of two complimentary gifts - an alarm clock or a set of Christmas-themed bath towels - and he distinctly remembers ticking the box marked "towels".

The sheep launch "Operation Righteous Indignity", and, fully armed, infiltrate the (open and unguarded) Gainsborough Crackers building. Finding Customer Services, Harris exchanges his clock for towels without problem - the clerk barely glances at him and explains they had a mix up with the delivery firm. At that moment, DI Hindle bursts in with his gun drawn. Peaches pokes him in the eye, and she, Moose, and Cooper escape to the lift whilst Harris drapes himself in the red towels and pretends to be Santa Claus.

Harris asks Hindle what he wants for Christmas, and Hindle, torn between talking to Santa and chasing the sheep, ends up sitting next to Harris describing the bread maker he dearly desires. Harris tells Hindle to close his eyes and count to three, "and we'll see what we can come up with". When Hindle opens his eyes, Harris is gone, and Hindle himself is surrounded by armed police officers with a sign on his lap reading "My colleagues are all poofs". He quickly turns it over, revealing the postscript "and masons".

Back at Harris' apartments, the quartet pull the Christmas crackers, and, afterwards, Harris bids his companions farewell. As Harris tidies up, the other three sheep return, declaring that it is their destiny to work together as a team, combating injustice and inequality. Harris suggests they go by the name "Combat Sheep".

The epilogue shows the sheep surrounding a business card machine in a shopping mall, debating over what to put on their cards. They settle on "Combat Sheep: Protection Correction Detection", though the machine ends up printing "Harold Critchley, Plumber, No job too small" above their phone number.

The story ends with a shot of Combat Sheep's card surrounded by similar notices in a shop window. The camera pulls back to show a typical Christmas street scene with snow and carolers.

Combat Sheep was a spin-off of the children's program Roger and the Rottentrolls, which also featured Commander Harris.[1] A co-production between Baby Cow Productions and The Children's Company for the BBC, Combat Sheep was created and written by Tim Firth (who also wrote for Rottentrolls) with additional material by Peter Baynham and Graham Duff.[1]

Harris, Peaches, Moose, and Cooper were voiced by Steve Coogan, Ronni Ancona, Mark Williams, and Kevin Eldon, respectively.[2] DI Hindle was played by Christopher Ellison, sending up his portral of Frank Burnside in the television series The Bill.

Plans were announced for a full-length feature-film version of Combat Sheep, to be made by Miramax Films.[5] It was be written by Tim Firth with Robert Howes producing in 2014,[6] but this did not eventuate.