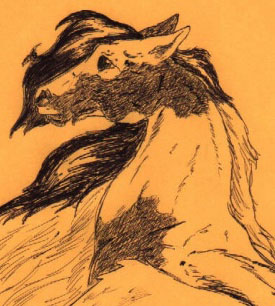 Colone by Alexandra Herakai, from a story illustration done in 2000
Colone Patchwork is a pinto pegasus who appears in works by Alexandra Herakai. He predates most of her current characters by several years, having been introduced as the mount of the mercenary Anya Ironhand in works of fiction as early as 1998.

In his first appearances, Colone was unable to speak to anyone but his rider. This changed later on, canonically through the intervention of the Gods. With this change, the pegasus's wit sharpened considerably, and the self-serving aspects of his personality developed further in the now-defunct grand adventure he went on along with his companions. During this quest he forged strong bonds of mutual respect and friendship with the assassin Shadowrose. Shadowrose also is one of the few friends of Colone's that won't be called "colt" or "filly" and whom the pegasus considers to be his equal. 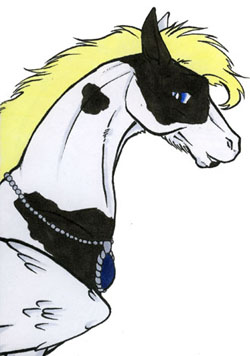 Colone by Alexandra Herakai, from a 2005 strip of Paladins' Haven
Appearance-wise, Colone is a black-and-white pegasus, of a build similar to a smaller and slightly lighter shire horse, with one blue and one brown eye. He also has a rarely-drawn anthropomorphic form, result of a freak magic accident. In this form he has the physique of a body-builder, due to his experience as a war horse for his first rider. Later works also have him wearing a sodalite charm on a chain around his neck; this is an enchanted necklace that at his command can expand to form a chainmail armor.

A soon-abandoned project called Memories of a War Steed told the story of Colone's early years from his own point of view. These memories were rather traumatic, ranging from being taken from his dam at an early age, through near-death as he was saddlebroken, to explaining his even for a horse extraordinary phobia of large fires.