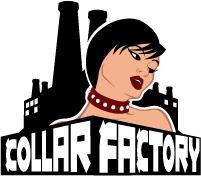 Collar Factory is an American Internet-based company that custom makes collars and cuffs. Their business headquarter is located in Milwaukie, Oregon.

The Collar Factory and furry[edit]

The CollarFactory.com forum has a Furry section, which as of August 10, 2008 contains some thirty threads, five of which were posted to in that month.

In the same blog post, Collar Factory announced a furry art contest for that conbook page. The guidelines were for an entered image to be PG-rated, depict "a furry/animated character ... prominently wearing a Collar Factory collar and cuffs". The prize was $35 off the winner's next purchase from Collar Factory.[1]

In August 2007 Collar Factory had announced their Collar Factory Video Contest to various websites. In the Long Island Furs LiveJournal community, in response to a comment labelling this spam, Collar Factory commented: "There is a very large fur community at Collar Factory, especially on the forums [...] We have worked closely with many people to build special collars for their fursuits, and been involved in fur community events. We are a part of other fur lj communities, and just recently joined this one as well."[2] A member of the community commented "we'd appreciate it if you didn't post on our journal unless it pertains to furries."[3]

Collar Factory made an identical post about the video contest to the Open Paws community on LiveJournal. After comments, Collar Factory's posts were declared "entirely off-topic" by a moderator of Open Paws.[4][5]