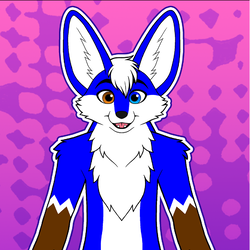 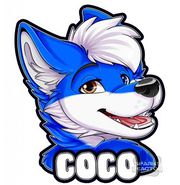 Coco getting his face painted by Kyro Fox (V.2). Art by MBPanther. 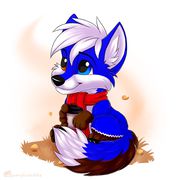 Lacquan is from Jamaica, and he lives in London, UK.

Coco has been Lacquan's imaginary friend since he was five years old until he turned his friend into a fursona later on in life. His species is a fennec fox, and his fur colors are blue, brown, red, white, and yellow. There were no early images of Coco due to the original drawings being lost during a house move in 2009.

Years later, a friend showed Lacquan a webcomic called TwoKinds, which influenced him in December 2016 to recreated Coco to what will become version 1.5. In March 2017, Lacquan made some changes to Coco’s muzzle, thus becoming version 2.0.

For version 2.5 ( September 2017), Lacquan made several changes, including changes to Coco's tail and a darker blue and brown fur. By October 2021, Coco evolved into his final look, version 3.0.

Coco Rapidpaws shares the exact story and characteristics of Lacquan. He is bouncy, caring, crazy, energetic, friendly, fun-Loving, hyper, and sly, with his likes being boops, chocolate, balloons, bubbles, cuddles, hugs, musical instruments, and other animals, while not being fond of cheese, fireworks, pizza, and people feeling upset.

According to Lacquan, Coco's name is based on his favorite chocolate at the time its creation (Hershey’s Cookies ‘N’ Crème). In version 1.5, his fur color is based on the wrapper of that particular chocolate.

Coco is also based on how much Lacquan loves to walk and run, an alternate reason being that sometimes, he loves to be very hyper and very snappy.