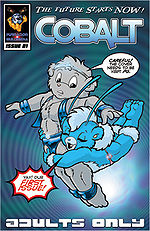 Cover art for issue one of Cobalt, the comic book.

The artwork inside is a mixture of 2D and line-rendered 3D, and although the artwork for the books was produced in full color, the first three issues were originally printed in greyscale. Beginning with issue four, the book switched to full color.

Six Issues total were created, with the sixth being dedicated specifically to Cobalt's evil twin, Talboc, and consequently numbered as issue 666.

The characters which have appeared so far include: 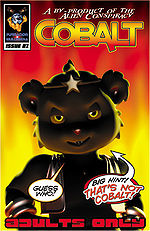 Cover art for issue two of Cobalt, the comic book.

The Cobalt comic is somewhat of a spin-off, from a series of 2-page comics known as the Evil Twin Strips, wherein Cobalt meets, and seduces his evil twin, rather than get into a fist-swinging battle with him. The first of these introduced Talboc, and the second was written as a "sequel" parody.

A third installment was requested by the publishers of Furnation Magazine, but Real-Life interruptions kept this third comic from being completed, and only a single page of it was ever done.