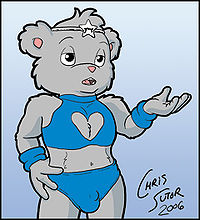 A 2-D Cartoon Image of Cobalt

Cobalt is the alter-ego of furry artist Chris Sutor. He is a four-foot, grey furred teddy bear whose trademark is a silver hoop "tiara" with a five-pointed star on the front. He habitually wears blue-colored clothing.

Cobalt's Species is given as Delos, as this is the name of his race, but to all intents and purposes he is a teddy bear.

Much of Cobalt's history is shrouded in secrecy. The most that is known, is that Cobalt is supposed to be "The Last of the Delos" - a title which has turned out to be in question since the appearance of his evil twin Talboc.

Much more isn't known, and Cobalt either doesn't know what happened, or simply isn't talking.

Cobalt lives in a three-story, futuristic "Skypad" which was manufactured by the FUTURO company. He shares this home with Twinkle the Foozle, a sometimes servant, sometimes lover, and sometimes comedic sidekick.

This three-story dwelling stands high in the sky, atop a pole, overlooking the capital city of the planet Iopa. Its interior decor seems to be a mix of 40's deco, 50's retro, 60's pop, and 70's plastic fantastic, including several Ball chairs. 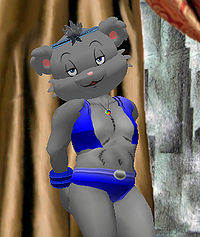 Cobalt was originally created as an alter-ego for Chris Sutor, on FurryMUCK. More recently, Cobalt has popped up on Second Life.

On Second Life, he goes by the name of Cobalt Neutra, as Second Life requires you to select a last name from a list of choices, and does not allow single-name characters. Neutra was the name chosen from the list as it was also the name of a character in the mythos of 80's pop band DEVO.

Cobalt almost became Cobalt McCoy, in reference to Doctor Who #7, Sylvester McCoy, but Chris Sutor's first attempt to sign up to Second Life was unsuccessful, and upon his second attempt, the list of provided names had changed.

The Neutra surname is unofficial, and outside of Second Life, the character is known only as Cobalt.

On Second Life, Cobalt's activities include: 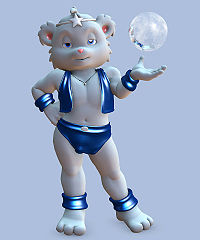 Cobalt appears in the COBALT comic book series, published by Furnation Multimedia. He also appears on CD-ROM artwork sets, which feature the artwork of Chris Sutor:

Although originally conceived as a 2-D cartoon, Cobalt has been translated into 3D through the wonder of computer modeling.

The 3D Cobalt has appeared in a number of images, a few short animations, and is currently being used as pose/anatomy/perspective reference, for drawing the 2D version.

Cobalt has used his 3-D skills to update his avatar to more closely resemble the 3-D rendering using mesh.

Cobalt also appears as a secondary character in the webcomic Evil Twin.