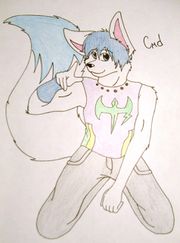 While browsing YouTube, Cody found a video series were the thumbnail looked like a raccoon puppet, Clicking on it, he found out it was actually a fursuiter. That person, Bleis, ended up becoming his fur father.[clarify]

Bleis told Cody all about the furry fandom, and introduced him to Fur Affinity, where he met several furs: Bekka (now known as Nova), Simba (now known as Nilla), John, Chris, and Nero the dragon, among others.[clarify]

He has mixed feelings about Comedy Central series Tosh.O video, What A Furry Really Is.[clarify]

Cody's fursona is an arctic fox named Cody after himself. He has blue hair and teal bangs.