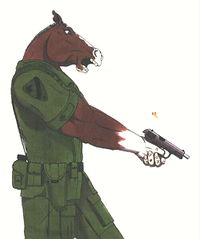 Clydesdale, also known as Clyde (born January 18, 1963), is an anthropomorphic artist who got his start back in the late 70's and who did not display his art till the early 80's when he was discovered by a few other artists at a local Chicago area convention.

His medium of choice was pencils, inks and marker, and never ventured into digital media, favoring the "old school" style. As of 2000, he has changed his style and medium to that of sculpture and is in the process of building up a gallery of his current works for future conventions such as the Mephit FurMeet in South Haven Mississippi, and the Rocket City Fur Meet in Huntsville, Alabama.

His photographic skills, and all past and current art can be seen in his online gallery on deviantART.

His artists name/moniker came as a result of being raised on his family's farm where they bred and trained clydesdales. While the surrounding farms in that part of Wisconsin primarily raised either percherons or belgians. Being that it may, his nickname came as no surprise, and as such became a name that most in the artistic community know him as.

His species of choice has always been equines, with the occasional feline or canine done in an anthro-style as well.