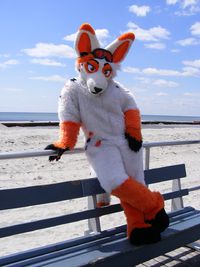 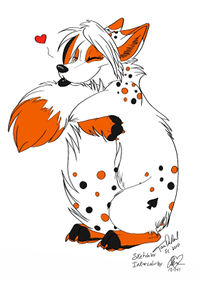 Clementine (also known as Vitani, Clementine Fox or ClemFox, born December 12)[1] is a furry artist, fursuit maker and fursuiter who lives in Murfreesboro, Tennessee, United States.[2] Her character is a "dick-girl" (all female with only male genitalia) white fennec with black and orange markings named Clementine, hence her name.[3]

Clementine makes fursuits under the name FruitSuit Creations. The creation of FruitSuit account at Fur Affinity was announced January 28, 2013.[4]

Clemetine has had 22 piercings and 10 tattoos, one being a sleeve started on her upper right arm.

She has attended many conventions including:

Clementine has also attended many local events including every Delaware Furbowl since Autumn of 2009, and every New Year's Furry Ball since 2008.

Her Clementine fursuit was created by White Wolf. The suit, along with others, was featured in a music video for the song Higher Than the Stars by the band The Pains of Being Pure at Heart.

She has another fursuit of her character Zaida, a thylacine/deer hybrid, which was created by Made Fur You. Zaida debuted at Further Confusion 2011.