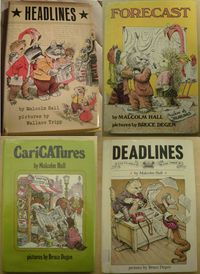 Covers of the Claws and Paws books.

The Claws and Paws newspaper office is the setting of four children's books written by author Malcolm Hall. The stories, individually titled Headlines, Forecast, CariCATures, and Deadlines, feature a variety of anthropomorphic animals.

The books were published by Coward, McCann, and Geoghegan, Inc, of New York, between 1973 and 1982. Headlines was illustrated by Wallace Tripp, whilst the other books in the series were illustrated by Bruce Degen. 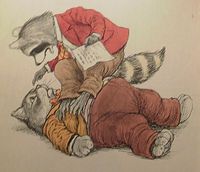 When Oscar Raccoon really wants your attention, he'll find a way of getting it.

The main, recurring characters in the stories are:

Minor characters in the stories include:

Theodore is horrified to find editions of the Claws and Paws being printed with mangled headlines. Repeated letters are being run together to produce such headlines as "SaDeeRoBanks" and "RicHippOwnSilveRattle". Oscar has discovered why this is occuring and has written a story about it, but he is having difficulty getting Theodore to take notice of it.

The Claws and Paws' weather forecaster, Stan Groundhog, is retiring. Despite Stan's forecasts having been little better than guesses, Theodore intends to hire another groundhog to replace him. Having taken classes in meteorology, Caroline tries to convince Theodore that she can more accurately predict the weather.

Theodore is depressed as sales of the the Claws and Paws drop, with readers switching to a rival newspaper, the Beastly Times. Oscar's nephew Hank suggests the paper lighten up its too-serious image by including comics in its content.

Having no arms or fingers, and only able to type with his nose, Humphrey Snake repeated misses his deadlines. Frank's wife, Sally, gets in contact with her cousin, who invents a machine to help Humphrey with his typing.