Citation Needed is an abstract and comedic comic written and drawn by Jaxon Diablos, which while at first resembles a typical cliché furry web comic, under the surface reveals more than one would first assume.

The comic follows the events of Jaxon Diablos and his unnamed squirrel friend as they attempt to raise money to replace a car belonging to their friend, and tenant of Jaxon’s boarding house, Marie. It has gone through several remakes as the artist continuously regrets drawing as poorly as he has done in various episodes of the comic, and although currently there are only 32 episodes currently out, there are over 100 in total.

The comic is disguised as a cliché furry web comic, but is in fact a satirical parody of furry web comics and the furry community as a whole. This is seen through various subliminal messages in what the characters say throughout the series. One example being that in an episode Jaxon’s unnamed friend states, “We could be involved in some sick mad man’s trap, where he’ll hunt us down like animals and kill us in slow painful ways. Or force us to engage in twisted roleplay sex acts.” This is referring to the act of online roleplay yiff, where in the characters minds they view the people who “force them” to act out these sex acts as “sick and twisted”. This reflects with the writers belief that if cartoon animals knew they were being made to have frequent sex rather than entertain children as they were designed to do, they would be disgusted.

Jaxon has expressed his wishes to update regularly for this, however he cannot put as much time into the web comic as he wants, due to his long hours at work, the fact that he spends more time practicing his art work rather than drawing, as well as powerful migraines causes by using the computer for more than an hour. 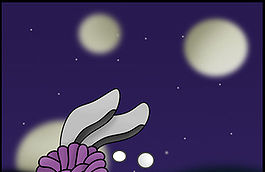 The image of the three moons.

Citation Needed is set in the city of Goldvale, a fictional town with an extremely peculiar way of life. For example, in the first episode of the latest remake, Jaxon literally kills several people from his rooftop after being scared about the rising costs of house prices, but is not investigated by police whatsoever. The town is also highly hinted to not be a town based on Earth, as in another episode a clear shot of the night's sky reveals there to be three moons.

There are various rumours about the web comic being set in the world of DMFA, Furrae. Jaxon has admitted that DMFA was a great inspiration for him, and would love for it to be official for Citation Needed to be set in Furrae, however in doing so this would cause Citation Needed to become a fan fiction rather than a comic of it’s own. It is because of this that Jaxon has neither confirmed or denied these allegations, and merely leaves it up to the reader to decide.