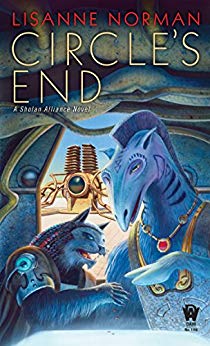 Circle's End is the ninth and final book in Lisanne Norman's thrilling long-running science fiction series, Sholan Alliance, a saga of alien contact and interspecies conflict. Although they are best classified as science fiction, they also include elements of fantasy and romance. Many of the main characters are telepaths, which is one of the major elements of the series.

It’s been a long journey, taking Kusac Aldatan, his family, and allies over countless light-years and to numerous planets and space stations.

Finally it is the time for Kusac and his allies to deal with the threat of the warrior Valtegans on their world of M’zull. Will he work to rehabilitate them using tools given him by the Touiban scientists, or will his calling as the Avatar of Justice take over and destroy all of his foes?

Isolated on M’zull, Kusac—with his clan of Sholans and Humans—works to destabilize the Valtegan society, posing as the avenging spirit of the long-dead, legendary hero Zsadhi. Is it a ruse to fool the M’zullians, or is Kusac becoming more and more like the first Valtegan king with every passing day? If so, can he escape that destiny and chart his own course?

His mission will take Kusac and his clan into mortal danger. Even his young son Shaidan, supposedly safe on a far-distant world, has, unbeknownst to his father, become bound up in the whole plan to destroy the martial spirit of the M’zullians. Can Kusac navigate these dangerous waters and bring all of his family safely home while at the same time ending the M’zullian threat forever? Or will the price of victory prove too great even for the Avatar of Justice?