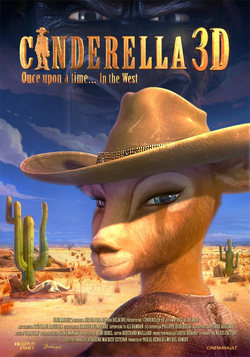 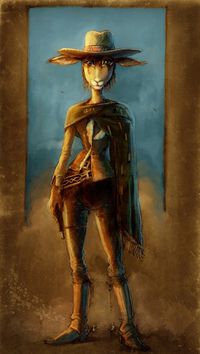 Cinderella 3D is an animated feature film, by Delacave Studio in Paris, France. The film is about an anthropomorphic deer, Cinderella, who follows the traditional story of Cinderella with the twist being that it's placed in a western setting and Cinderella herself if a cowgirl who can fight.

The story starts off in a small western styled town called Felicity City with Cinderella, a doe, complaining about the lack of mannerisms with the males as she works for her stepmother, Felicity, a pug. A train then arrives with a classy canine prince and his cheeky turkey mother, Duchess. Felicity throws a ball in the local saloon to celebrate the coming of royalty all the while plotting to get one of her two daughters married to the prince. Cinderella having seen and been infatuated with the prince laments that she can't attend as Felicity kept all attractive females out of the ball. A shaman friend of Cinderella sees her and helps her get into the ball by casting a spell that gave her a mask, make up, and a dress that will wear out at midnight. Cinderella now disguised forces her way into the ball and catches the princes eyes immediately. They begin to dance meanwhile the princes mother and Cinderella's stepmother enjoy a game of poker in a backroom. Felicity hustles the queen of all her earnings by pretending to not know how to play well and eventually convinces her to bet her son's hand in marriage. By cheating she wins and the queen feels bad for what she did. Then the ball gets attacked by a group of primate outlaws seeking to capture the queen and prince. They manage to capture the queen but the prince evades capture because Cinderella fought to protect him, losing a tooth in the process. Cinderella flees the saloon as her spell wears off, the prince is knocked out cold by Felicity who is determined to give him to one of her daughters.

The next morning the prince manages to escape Felicity's goons by putting them to sleep by playing a violin. He then meets Cinderella, not recognizing her and the shaman. Out to rescue his mother and find the woman who he danced with the night before with only her tooth to go by, Cinderella and the shaman go with him to help him find his mother. As they go, Felicity gets her daughters and goons and hunts after them. While this is happening the outlaws take the queen back to their hideout, a ship in the middle of quicksand, and try to politely threaten her to sign a will that would give their leader her inheritance. She takes advantage of the polite nature of the leader and bides her time while her son and Cinderella run from Felicity and track the outlaws. During their journeys, the prince eventually realizes that Cinderella is that mystery woman from the ball.

As Felicity catches up to Cinderella and crew she pulls out a gun and tries to shoot Cinderella. The prince and shaman lose them through luring and tricking them to fall off a cliff. They then find themselves in a forest dense with bizarre flora, where the bandits find them and begin to ride vultures to chase them, ultimately they find the bandit hideout and Cinderella gets captured by the bandits, while the shaman is left to die. While the bandit leader, Jefe, tries to threaten the duchess by threatening to kill her son if she didn't sign a contract. The threat is interrupted by Felicity and her goons shooting canon balls at their ship, ultimately causing it to begin sinking. The bandits, frightened, begin to abandon ship while the prince fights the leader. The fight is cut short when Felicity and her goons and daughters arrive and hold the captain at gunpoint to marry herself and the prince. Cinderella lights a cannon that was stuck to the captain's leg and it fires him off into the distance. The damage from the cannon fire begins to cause the ship to break into pieces and sink. At the which Cinderella, the duchess, and the prince, make their way to one end of the ship. Felicity is stuck on a part that's sinking faster, Cinderella offers her hand to help, but Felicity refuses, and dies. The shaman appears at the last moment with vultures and saves the three protagonists. The movie ends with Cinderella and the prince taking the train to leave the town, presumably to marry and live at the prince's home country.

The movie garnered generally negative reviews from critics and viewers alike. Scoring a 3.9/10 on Rotten Tomatoes from the users. Dawn Hunt from DVDVerdict was displeased with the jarring changes from the titles fairy tale origin, noting how "she's [Cinderella] a pretty snarky woman. Or I should say a pretty snarky cow. Or possibly dog, I honestly couldn't tell." and the wild antics. Similarly, Renee Schofeld berates the slapstick, violence, and story being loosely associated with the fairy tale, giving the movie 2/5 stars. Some praise was found, however, from the visuals and character design.