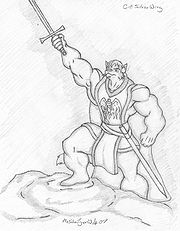 Cid Silverwing, born 8th February 1991, is a furry writer from Norway. Cid describes himself as a "Lightsworn Crusader of Justice".

Cid Silverwing's character is a male anthropomorphic Red Fox paladin. He always goes by his nickname on the Internet (due to proven disdain for his real name).

His character is based upon himself, but polished with no psychological disorders or disabilities. He drew heavy inspiration from the MMORPG World of Warcraft as a basis for his character.

Although his character serves a deity, Cid is actually an atheist in real life and is an outspoken enemy of religions, primarily all forms of Christian and Islamic religions. He repeatedly makes radical statements about how all religions (principially excluding Buddhism) should be banned.