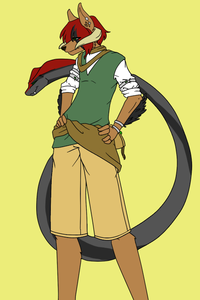 Cid, as drawn by himself.

Cid (also known as Painted; born September 18)[1] is an anthro artist who lives in Newark, Delaware, U.S.A.[2] His fursona is a chimera.[3] Cid is an administrator on The Furst State forums.

His fursona has gone through many changes over the years. Starting as a fox, he then became a generic canine, leaning toward jackal. The addition of horns made him a canine/ram hybrid, and from there he finally settles on the species chimera. His main body is that of a canine, with the horns of a ram and the feathers of a crow. His tail is a cobra named Amadeus and is a semi-sentient being.