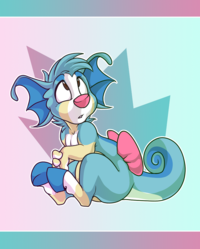 Chu Chu, or Gargoyale (born November 28, 1993), is an anthro artist and animator who lives in La Palma, California, USA.

Chu Chu is genderfluid and is okay with he/him or she/her pronouns. 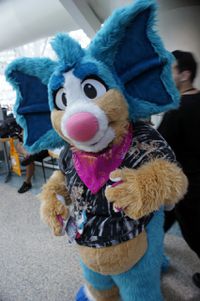 Chu Chu has been a furry fan since 2008. The first furry convention they attended was Califur 7 and they have since been spotted occasionally at local meets, such as the annual SoCal FurBQ.

Chu Chu's main fursona and fursuit character is an androgynous kyucean named Chu Chu (or just Chu for short). They are a small creature with aquatic and equine qualities, featuring a long, prehensile, curly seahorse tail and pink fins on their back. Chu has large blue fins for ears and is hairless except for the mane on their head. Their main body color is a shade of turquoise with pastel yellow, darker blue, and white markings. Chu has pink webbing in-between their front paws, and has blue hind hooves. Chu's personality is presented as lovable, cute, and shy.

Chu Chu's other fursona is a grey and white female kangaroo named Kangachu. She has orange eyes, nose and claws with a lime green tongue.

Kangachu, Chu Chu's first fursuit partial, was made by SilverSkyStudio in 2012. The original fursuit was sold and edited into a new character.

Chu Chu, completed in 2014, is a 3/4th partial fursuit with parts made by many different builders:

Chu Chu's 30 second film about a kangaroo who can't jump high. Made their sophomore year of college in 2014.

Chu Chu has been drawing for as long as they can remember, and, as of August 2014, is an art student studying to get a bachelor's degree in Animation.

Chu was heavily inspired by Disney and DreamWorks as a kid as well as by the first seasons of the Pokemon Anime and Fullmetal Alchemist. When they discovered art websites in 2007, they joined deviantART and discovered they were a fan of transformation art.

Chu Chu joined Furaffinity in 2008 as ChuKazoo but was not active until they rejoined in 2011 as Kangaroo.. In 2012 they moved accounts to Gargoyale and have stayed there since and actively take commissions.

Chu Chi was taught to animate the traditional way with paper and pencil on 24fps. Chu enjoys drawing in a western cartoon style. The majority of their work is g-rated and cutesy, however sometimes they dabble in the transformation fetish and PG-13 material. Chu Chu is not a babyfur but does not mind drawing them.