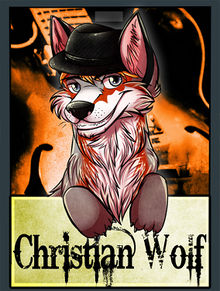 Christian Wolf, also known as Chris Wolf, Christian, or simply, Chris, (born March 9, 1993) is a male furry artist living in Mooresville, North Carolina, U.S.A. His fursona is a grey wolf, or as he calls himself, The Celtic Wolf.

Christian first discovered the fandom at age 16,[when?] while at a Raleigh, NC anime convention called Animazement. Even at an early age, Christian has always found anthropomorphic animals to be quite fascinating, but mostly from just watching classic cartoons on TV. Christian didn't discover the more 'adult' side of the fandom until one year later.

He describes himself as a quiet, shy, short-tempered, and sometimes emotional, yet outgoing, kind, very helpful, studious, and often times random person. He loves making new friends and hanging out with friends both in and out of the fandom.

Christian enjoys watching television, drawing, hanging out with friends, playing with his dogs, surfing the net, listening to music, playing guitar, and occasionally writing his own music.

An example of Christian's artwork

Christian Wolf has been drawing for as long as he can remember.

Even as a young toddler, then a child, then through adolescence, Christian has always loved drawing anything his mind came up with and it even won him two art awards: one in elementary school, and in his senior year of high school. His first official furry art piece was a dry pastel piece of his fursona in his feral form.

As an artist, he prefers to be more traditional than being a digital artist. All of his furry artwork is paper, pencil, and colored pencil.

Christian likes to experiment with different styles of art, but his main specialty for furry art is cartoon style. He recently announced that he was going back to drawing feral commissions.

His first instrument was the alto saxophone, but lost interest after two years. He decided to play the guitar. Christian owns two guitars: an Epiphone Acoustic and a Yamaha Electric guitar. He has currently finished writing his first song and he and his guitar teacher are creating the guitar parts of the song. His song writing is full of dark, mellow, and often times personal meaning.

Christian is a grey wolf, but is not like many grey wolves in the fandom. His previous look was orange-yellow hair and very distinct markings that go from his muzzle down to his waist and on his tail, white fur from the jaw to the waist, and a green formation on his back in the shape of a Celtic cross. When Christian got his first gift badge from Lil Chi Wolf in 2010, she mistakenly made the distinct markings red instead of orange. He actually liked the red and stuck with it. The orange hair stayed. He recently created his own ref sheet and made some new changes to his tail markings and adding markings on his legs. Christian is somewhat chubby but doesn't show it when wearing clothes. One of his trademarks is a black fedora he wears on his head.

Christian is a very tolerant christian, who isn't afraid to stand up for what he believes in. He lives a clean, straight-edge lifestyle, and is against war between other countries. He doesn't like to be involved with politics or political situations. He is very outgoing but kind of shy sometimes when meeting new people. He loves to draw, write songs, and play video games. He is currently single and looking.

Anarchy is a white tiger, with black stripes that look like lightning bolts, a black tip on his tail, and glowing green eyes. He has long white hair with silver streaks and black ends. He is very trim and some muscular. He wears dark clothing, mostly black.

Anarchy is always in a serious mood, but is very kind and outgoing as well. He hates the US Government and people who aren't nice to others. He likes listening to music, playing guitar, and watching tv.