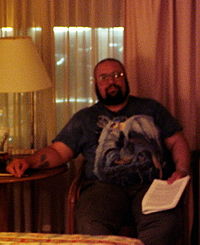 Chris Litzau (Michigan Wildman) is a furry fan and role-playing gamer who resides in the vicinity of Port Huron, Michigan, USA. His main contact with the fandom is through attending Anthrocon and working con security there.

Chris was a proofreader for Silver Fox Publications, as well as collaborating on the groundwork for a furry novel with Ken Pick, a "space-opera romance about a seven-foot (over 2 m) terror-bird Cinderella and her felitaur Prince -- sort of" using characters originally from a highly non-canonical Albedo/WebFed crossover campaign he ran years ago after tracking down Ken at an Anthrocon.[citation needed]