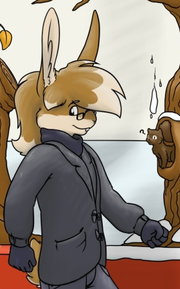 ChocolateKitsune, also known simply as Chocolate, is a European[1] furry artist. Before he joined Fur Affinity late 2005[2], he was on deviantART until that account was deleted[3][4]. He has since expanded to Inkbunny[5] and Weasyl[6] but his main activity is nowadays limited to FA and IB.

Chocolate specializes mainly in sketches and linework[7], as he is not very fond of coloring[8].

ChocolateKitsune's OC is a kitsune in the form of a rabbit with the fur colors of an arctic fox's summer coat (brown and cream). He was not always a rabbit; having started off in the form of a two-tailed fox[9]. He changed to a rabbit fursona as of April 10, 2008 [10]. He has not entirely abandoned his fox fursona however, and has revisited it on request[11].

Chocolate is 5'11", and his character sheet describes his personality as "doting, somewhat overbearing, egotistical, wise" and "calm but defensive". It also scribes him as a "powerful mentalist, a skilled alchemist", and he indulges frequently in other people's sexual fantasies. He is bisexual, has a 7 inch human penis, and prefers being dominant[12]. 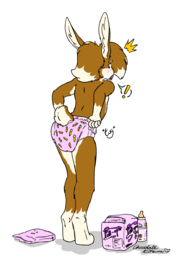 ChocolateKitsune is a diaperfur and cross-posts his babyfur/diaperfur art on his alternate Fur Affinity account, ChocolateKit[13]. He specializes in the subject matter and has worked for CushyPen for a few years[14], and regularly posts on his alt account despite his vested interest in branching out to other subjects[15].