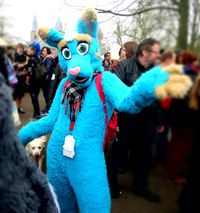 Chiyo's best-known fursona is a wox (fox-wolf hybrid) called Jayden. Since spring 2015, Chiyo has had a fursuit of her character, which she made herself.

Chiyo's hobbies are art, sewing, writing, and being the drummer of her own band.