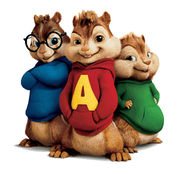 The Chipmunks, Alvin, Simon and Theodore, a group of fictional chipmunks from Alvin and the Chipmunks . 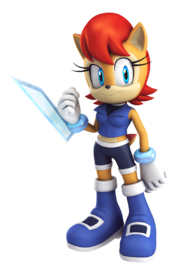 Chipmunks are small burrowing rodents of the genus Tamias, which is part of the squirrel family native to North America and significant parts of Asia. They are easily recognized by the five longitudinal stripes on their backs, and cheek pouches in which they use to transport food back to their burrows.

Tamias (greek word meaning storer) refers to the natural behavior of collecting and storing food larders for the winter. There are twenty-five recognized species of chipmunk including one specie Tamias Striatus in north America, T. Sibericus in north eastern Asia, and the rest in western North America. It is widely assumed that chipmunks received their name due to there distinctive "chip" chip" calls. In fact, its an Anglicized curruption of Native American word from the Odawa tribes meaning "red squirrel". It was labeled by early White Settlers as adjidaumo or sometimes as achitamon. When the vocabulary of Chippewa words was drawn up by John Long in 1791, that tribe's word for squirrel was rendered as chetamon. This forms the bases from which the modern word Chipmunk evolves from by way of chitmunk. Chipmunks are also refereed to as "chippers", "munks", "timber tigers", or "ground squirrel". Though the name "ground squirrel" usually refers to members of the genus Spermophilus. Tamias and Spermophilus are only two of the 13 genera of ground-living sciurids.

Some well known chipmunk characters from popular culture include Alvin and the Chipmunks, and Disney's Chip and Dale from Chip 'n Dale Rescue Rangers.