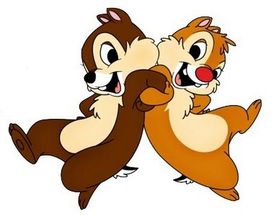 Chip and Dale, also known as Chip 'n' Dale or Chip an' Dale, are two chipmunk cartoon characters created in 1943 at the Walt Disney Animation Studios.

Their names are a pun based on the name Chippendale (see Thomas Chippendale). This was suggested by Bill "Tex" Henson, a story artist at the studio.