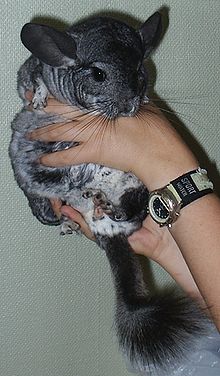 A male farmer-stock standard grey chinchilla
The chinchilla is a primarily nocturnal rodent from the Andes, bred by humans for its fur and as a pet. There are two species in the family Chinchilladae: the short-tailed chinchilla (Chinchilla brevicaudata) and the chinchilla (Chinchilla lanigera) which is the more commonly referred-to pet species. They are fairly closely related to viscachas and guinea pigs. The name "chinchilla" comes from the fact that they were first discovered with the Chincha people, who kept them for fur and meat; the name literally means "little Chincha".

The wild chinchilla is grey in color, with a white belly, a brushy tail and bald ears, but many color mutations have been bred into the pets. Some of these include black, brown, beige, white, and a bluish or violet tint to the grey fur, as well as mutations that cause the animal to have patches of color on white ("mosaic") or cause the base color to wrap around the normally white belly ("ebony"). Its fur is incredibly soft due to the fact that chinchillas unlike other mammals have several very thin hairs in each follicle. The fur is cleaned through a roll in very fine sand, a "dust bath".

The bottoms of a chinchilla's paws are bald and feature short claws much resembling human nails. They are able to grasp and hold small items with their front paws.

Chinchillas are short-sighted, active and excellent jumpers and climbers. When frightened, especially if grabbed or stuck somewhere, they will lose patches of fur much like certain species of lizard lose their tails to escape predators.