Child of the Wolves

From WikiFur, the furry encyclopedia.
Jump to: navigation, search
Culture > Publications > Novels > Child of the Wolves 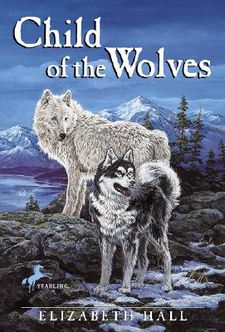 Child of the Wolves is a children's novel by Elizabeth Hall, published in 1996,[1] about a Siberian husky puppy that joins a wolf pack.

Granite is born on a snowy April day in Alaska. For the first weeks of his life, he lives in the kennels, playing with his siblings Digger, Cricket, and Nugget. Even though their mother Seppala gets sick, life is good there. His owners, Tim and Kate, takes good care of him. Granite differs from the other pups. He is uneager to train to be a sled dog.

One day, when the pups are ten-weeks-old, a man shows up to buy Granite and his sister Cricket. Even though Cricket is bought and doesn't mind going to a new home, Granite does not want to leave his mother and runs away from where he grew up. He ran away into the Alaskan forests. After days wandering alone,hungry and injured, the Siberian husky puppy meets a wolf pack, led by a black wolf named Ebony and his mate, Snowdrift the white wolf, who had her pups kidnapped weeks before. She takes Granite in. Snowdrift raised the dog as a foster son and teaches him to be a mouser. That seems to help her get over some pain in losing her pups. It was mentioned that her pups were stolen by humans who wanted to breed young wolves to huskies, for wolfdogs are worth a lot of money.

Even though he protects Granite, Ebony does not like him, and neither do Strider (Ebony's brother, Granite's chief tormentor), Roamer (Ebony and Snowdrift's two-year-old son), and Breeze(a female wolf who came to them from a pack in the west). The other wolf who likes Granite is Snowdrift's yearling son, Climber. Granite and Climber become fast friends. Granite is less afraid of Climber because the young wolf had a " husky face", and Climber was pleased to have a younger member (so his rank rises)regardless of Granite being a dog. Another reason the pair played together was that Climber is still young, and was a pup not a long time ago. Ebony pretends the dog wasn't there, and Breeze fed Granite only to humor Ebony. Roamer and Strider fed him just to show Snowdrift. When she wasn't there, they took back what they fed Granite. Strider, later on, pretends to give Granite a lesson and lures the young dog into attacking a porcupine. Granite got tricked and a face full of quills.

Granite hopes to please Ebony by trying to catch a fox but nearly lost his life. He nearly ran into a trap, but Breeze stopped him from running into it just in time. He is, again, scorned by the others for his lousiness. However, later on, Climber is killed during a moose hunt, and Granite must try to earn his place in the pack, while dodging Roamer and Strider and other dangers of the Alaskan wilderness. Granite then runs away, overwhelmed by the torments that came from Roamer and Strider. Granite proves to be no longer a puppy who cannot fill his own stomach. He did fine save for the dark cloud of loneliness that grows bigger each day. He met another pack of wolves, as he had intruded into their territory. They welcomed the dog with slashing teeth. Granite returns to Ebony's country and the black wolf,though angry, lets him in.

Meanwhile, snowdrift attempts to search for her lost pups but is shot by hunters. The rest of the pack finds her, though she was blinded and wounded. While Snowdrift recovers, Breeze is almost kind to the dog and teaches him how to hunt salmon. In the fall, Granite kills a marmot but Roamer tried to take it away. Granite fought the balck wolf and won, and Roamer dared not to challenge him again. In the end, Granite saves snowdrift's life. Ebony lets the dog hunt along him, making Granite's dream come true. Even Strider was friendly and no longer challenges the dog. Granite, now more than two years old, realizes that he is home.