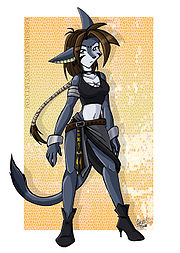 Cherushi (in full Cherushi Kinukaze) is an artist who lives in Edmonton, Alberta, Canada. She has been known by other character names including Kumori, Shishta, and Ja'Ren. These characters have since become supporting characters in a comic project she is working on entitled "Better Than This".

Cherushi's fursona is an Ervajac: a serval crossed with an Egyptian jackal.

She is a very light-hearted personality, and is very flirtatious, but highly devoted to her mate, AmonOmega. She does, however, have a very short temper, and generally prefers her solitude. She is also fairly shy and needs to have others engage her in a conversation before she feels comfortable conversing.

In the Japanese Anime based comic, "Better Than This", Cherushi plays the part of an eccentric bohemian girl living in a Vancouver, British Columbia apartment complex heavily populated by women. She works in a book store down the street, and constantly changes her style and looks. She is infatuated with the main character, AmonOmega, when he moves into the building, and they meet in the pornographic section of her book store.

Unlike many of the other girls in the story, Cherushi would rather stay friendly with Amon, instead of throwing herself at his feet. She is often left feeling very low when the other girls continuously rub their successes with Amon in her face. She spends much of the story trying to pinpoint her personality and who she really is. 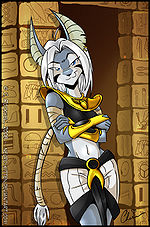 Cherushi in her "Necro" form, acting as a reaper for Anubis. Art by Cherushi.

Cherunephre, is Cherushi's almost-identical ancestor from the time of Ancient Egypt, and is a servant to Anubis the Egyptian god of the dead. She learns that because she is half-jackal, he can control half of her soul, and tells her that she is now to act as a reaper on Earth for him. However, he cannot control the other half of her soul, as he has no domain over the serval species.

She becomes a "Necro Reaper", meaning that while she is in service, she is quite literally dead. She searches the land for escaped evil souls and captures them to be judged at the weighing of the heart ceremony. If they are guilty (which they usually are) their soul is consumed by Ammut and they cease to exist.

Cherunephre ends up losing a battle with a spirit who turns out to be demonic. When she returns to her normal form, the spirit follows her home, and a fight ensues. Cherunephre loses her right eye during the battle, and Anubis replaces it with the "Eye of Anubis". With this, she can see once more, and he can communicate with her and see what she sees.

In this time line, Cherunephre is single, where as Cherushi in modern times is with AmonOmega. Cherunephre does not have time or patience for a solid relationship, she merely has physical connections with some. Cherushi on the other hand, is completely loyal to Amon.

When Cherunephre is in her normal form, the eye appears to be nothing more than glass, and she cannot see through it. It is only when she serves Anubis that she can use it's power.

Ja'Ren (in full Ja'Ren Kinukaze) is a furry artist who lives in Edmonton, Alberta, Canada. She has since changed her name to Cherushi. However, Ja'Ren plays a part as a supporting character in a slice of life comic, entitled "Better Than This".

Ja'Ren is at first, thought to be a wolf/tiger hybrid Species, but later in the comic series, she is revealed to be pure blooded wolf, having only painted on her stripes and tattoos.

She lives in an apartment complex filled with women, she is a surly, angry, cantankerous girl. But when she is astounded at the cranky attitude of a very frustrated AmonOmega she is rather stricken, and tries to show her love through every means she can possibly think of, which generally consist of pain and embarrassment for Amon.

Ja'Ren has had a bad past, and it creeps up to bite her every so often, and whenever this happens she feels the need to run and hide. She has had a criminal record since she was 13, and is usually the first suspect that the police tend to question in theft cases.

She has no real ambition in life other than to survive, and even when she is in love with Amon, she refuses to believe that she could ever settle down. Even though she wants to be a normal girl, with a normal boyfriend, she tends to shy away from his affections. 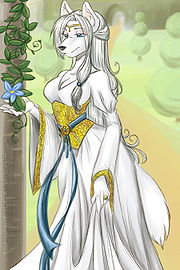 Kumori (in full Kumori Kinukaze) is a furry artist who lives in Edmonton, Alberta, Canada. She has since changed her name to Cherushi. However, Kumori plays a part as a supporting character in a comic project she is working on entitled "Better Than This".

Kumori is an arctic wolf, and is very heavily endowed. She is a model and actress in the story, and is trying to make a name for herself. She is constantly being harassed to be in pornographic films, but she tries desperately to save face and avoid them at all cost, claiming that she wants to be known as a real and serious actress.

She falls in love with AmonOmega and uses him as her excuse for not breaking into the adult industry, claiming that he is a possessive boyfriend that will not allow her to be with other people. Of course, he manages to use this to his advantage and often ends up in romantic trysts with her.

Kumori is a very kindhearted person, and wants nothing more that to show her talent to the world.