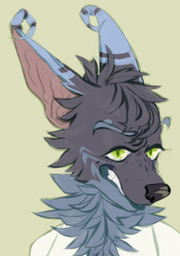 chemicalcrux first joined FurAffinity in 2013 under the name FenrirFangs and migrated to his present username in 2014. He has produced a variety of furry media, mostly revolving around subjects such as macro and vore.

chemicalcrux's fursona, Fen, is a blue crux, albeit one with a more "natural" anatomy than the average crux. While typically 7'5" (2.26 meters) tall, he is frequently a macro fur at variable scales.