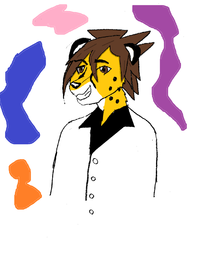 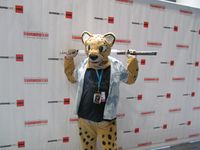 Flint the cheetah during Anime Expo 2012

Cheetahboy16's fursona is a 21-year-old cheetah named Flint Olimar. Flint was also in one of Joey's stories, Newfangled!. According to this story, he found himself in a world filled with other anthro cheetahs in the year 3000 AD, and lives in a large city known as Duma. He has trouble trying to fit into this furry-populated world.

Cheetahboy spends time drawing cheetahs. In June, 2011, he set up a Fur Affinity account, which contains storyboards of one of his upcoming films. He also takes commissions for artwork of other furries, for free or sometimes for a trade.

Joey had been fursuiting in conventions since July, 2012. Unlike most, his fursuit is not made with fur, but a rougher fabric; something more realistic to his character. Joey attended AM² and Anime Expo 2012.