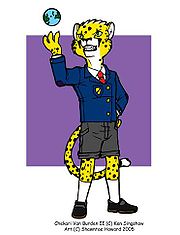 An example of a real life Cheetah.

This is an article about the species. For topics that share the name, see Cheetah (disambiguation)

The Cheetah is a feline species traditionally grouped with the "big cats" (such as lions and tigers). Taxonomically they are in a different subfamily from all other surviving felines and thus are not closely related. They are carnivorous predators.

Cheetahs, in nature, are social predators, and are able to use rapid bursts of speed to bring down prey. In the fandom, that they can only be the fastest land mammals alive for sprints of about sixty seconds is sometimes not noted, as many anthro cheetahs are portrayed as being able to run far longer than that. In other instances, anthro cheetahs are said to be lacking in endurance.

Normal cheetahs are endangered animals. Due to a genetic bottleneck some thousands of years ago, all cheetahs are to some degree interrelated. Thus, even under ideal conditions, cheetahs would be in trouble, as their infant mortality and rates of birth defects are high.

In terms of coloration, Cheetah's base color orange-tawny countershaded to cream or white, closely covered with dark spots in an irregular pattern. The spots are quite dense even on the throat and underside, although many Cheetah characters as depicated in artwork show few spots there. One distinguishing marking of cheetahs is the S-shaped tear lines that run from the front corners of their eyes to the back corners of their mouths on each side of their head. One type of cheetah, a genetic mutation known as a king cheetah, has an unusual coat pattern in which the spots are joined in an irregular pattern.