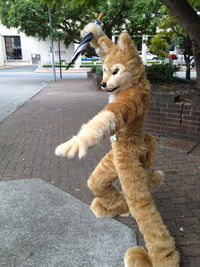 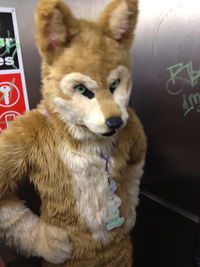 Chay FuzzDingo's fullsuit, in an elevator.

Chay has been actively involved in the furry fandom since 2009, but had been a fan of anthropomorphic animals long before learning that the fandom existed.

Chay FuzzDingo's fursona is a semi-realistic Australian Dingo. Located on his left shoulder Chay has a tribal tattoo sleeve that runs down to his wrist.

The only differences between an actual Dingo and Chay's fursona is the length of his fur and the colour of his eyes (being bright green). Hence the surname "FuzzDingo". Chay FuzzDingo's fursona was designed to resemble how he truly sees himself, but is also designed to be as realistic as possible with a hint of cartoonishness about him.

In early-to-mid 2012, Chay acquired a commissioned fullsuit which accurately portrays his fursona. It was made by Australian fursuit maker InkFire, of Ink's Pride Productions.

Chay has attended numerous small furry gatherings since acquiring his fursuit. He appeared in the 2012 Winter Magic Parade in Katoomba, New South Wales, Australia, as a part of the local Sydney Fur group ("Sydney Fursuiters"). He wore a partial fursuit belonging to a friend of his.

During the course of the parade, Chay made his presence felt, along with the other fursuiters of the day, and was even photographed by the local newspaper and featured as the primary photograph on the paper's story on the parade.

Chay has subsequently been to other furry gatherings in his Chay fursuit, such as bowling and social gatherings in various Sydney locations.

In February, 2013, Chay attended CBRFUR. Later that year, in June, he attended Wintermagic once again, where he participated in the parade with his fellow furs. The following day Chay was attended Supernova. In July, 2013, Chay FuzzDingo then returned to Canberra for CBRFUR3, where he spent the day at the cotter[clarify] followed by the following day fursuiting at Questacon.