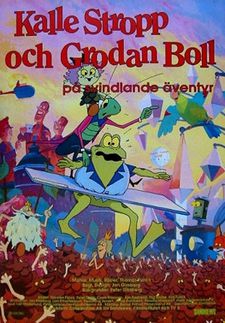 It follows a shorter film made by the same team in 1987, Charlie Strap and Froggy Ball. This is the first time since before 1954 where a Kalle Stropp production features voice acting by others than only Funck himself, only with the exception of children that had participated in other productions as well. Also notable is that The Hen, one of the prominent characters in the Kalle Stropp canon, doesn't appear.

Something strange has been spotted over the tree tops in the forest where Charlie Strap and Froggy Ball live, and Plåt-Niklas quickly builds a monocular to examine it. It turns out to be an emergency signal and the two friends together with Plåt-Niklas and The Parrot set out on an expedition to resque whoever is sending the signal.

While crossing a stream, though, Froggy Ball falls down a small waterfall and ends up in a dark cave. While looking for a way out he stumbles upon the Cone People who live there and quickly befriends the Cone King and Queen. In the meantime Charlie Strap has met up with Kottegrön, a young and impulsive female cone, and soon joins Froggy Ball and the others. It turns out that the Cone People are the ones who have been sending the signal, and when elevated up to a tree top Charlie Strap and Froggy Ball see a helicopter landing, with three evil businessmen from the company Tonto-Turbo who are planning to tear down a huge part of the forest. When the businessmen leave, Kottegrön ends up being with them on the helicopter. Charlie Strap and Froggy Ball hang on to the landing skids, but eventually fall off high up in the air over a lake. Luckily it turns out that Carlie's tailcoat can be used as a parachute, and Froggy Ball even learns how to steer it by pulling the tails so they can land on a steam boat. On the boat Plåt-Niklas and The Parrot succeed to locate them so they can join them again.

The boat takes them to Gripsholm Castle, which turns out to be where the businessmen were heading too, as their full plan is to move the old castle to the cleared space in the forest and turn it into a hyper modern luxury hotel, replacing most of its walls and floors with glass. This will be made possible by hacking the authorities' computers with a special program they are keeping on a floppy disk. Kottegrön, who has been hiding in a briefcase, tries to steal the disk but fails. Instead she, Charlie Strap and Froggy Ball end up on the bottom of the castle well, but are soon resqued by Plåt-Niklas who has the ability to fly. In the meantime the men from Tonto-Turbo leave again in their helicopter. Plåt-Niklas calculates that they are heading to the city, before he flies back to the cone forest with Kottegrön.

In the city, Charlie Strap and Froggy Ball walk up to Tonto-Turbo's central office and confront them, but are simply laughed at and disregarded. The businessmen then head off to the Nobel party where they have been invited. The two friends, left in the office, discover that the men forgot to bring the floppy disk with them. They try to find out which one of the disks at the office it is that is the real one, and while trying one in the computer the frog ends up inside of a computer game and Charlie has to control him into safety with the joystick. Soon after that, one of the men returns - and takes the right disk with him.

Unable to get into the Nobel party, Froggy Ball is ready to give up when a submarine appears. Out of it come Plåt-Niklas and Kottegrön who have returned. Through the kitchen they smuggle themselves into the party by hiding in the dessert - an ice cream parade. When inside Froggy Ball holds a speech where he accuses the men from Tonto-Turbo in public. The atmosphere becomes confused, and the men capture the two friends and decide to get rid of them once and for all. But then suddenly The Fox, who had previously only been seen in a short cameo in the very beginning of the story, arrives and causes disruption. While the men are distracted everybody can escape, and Kottegrön steals the floppy disk. After a wild chase though, the men recapture the disk, but only to see an army of cones arrive and chase them into the water, where also the disk is dropped by The Parrot.

Back in the cone forest the frog is awarded a prize from the hands of the cone Minister of Flower Pots and the businessmen are given a new profession - shaving sheep, which they seem to enjoy.