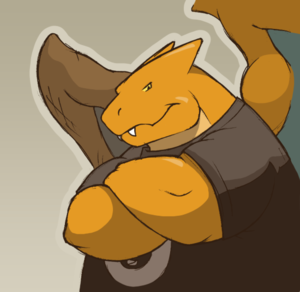 Charkonian, as depicted by Greening.

Charkonian (in full Charkonian Graotl Ard) is an artist, writer, and amateur animator who resides in Laurel, Maryland, U.S.A.[1] His fursona is a Charizard.

Charkonian, or Chark as he likes to be called (He actually prefers women to call him Charky or Charkie, but in reality seems to show no change in disposition to males that do so), is a digital artist by hobby. His work varies between the occasional drawing in Photoshop, either short or extensive flash animations in Macromedia Flash, and even the occasional piece of literature, (though the latter is far more seldom than in recent years). He mentions that he also creates music every now and then, but is unable to display proof of such due to lack of the appropriate software.

His hobbies, aside from his artistic endeavors, are not well-known. However, he does seem to take fancy in speaking with those that happen to cross his userpage on the Fur Affinity website.

Charkonian is endowed with several characteristics that deem him very distinct from the official look of his species, as portrayed by the Pokemon franchise. His muzzle dons a small, sharp "fang" of skin on either side. He wears a black shirt, imbued with a symbol that translates to "I Would Screw You". His body stands roughly over 8 feet in height, in contrast to the 5' 7" of the official Charizard. His arms are also far thicker and far more muscle bound, and his horns only extend a couple inches from his skull. His tail is slightly shorter with a bit more width as well, and his right wing is completely scarred. The wings themselves are chubby, as is his belly, disabling his ability to fly. His underbelly color is gamboge, instead of the usual yellow.

His tail-flame reflects a change in hue in accordance with his emotional state. The usual orange flame denotes complacency; a blue flame would signal intense guilt or sadness, and a red flame the exact opposite -- carnal rage. His least favorite, the pink flame that only appears in moments of embarrassment, is often the target of good-natured mockery.