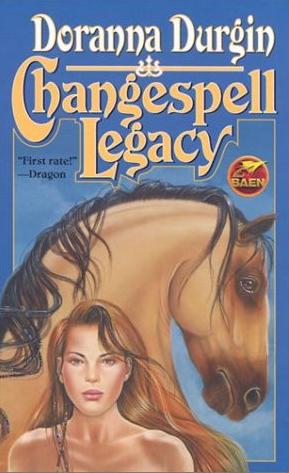 In Doranna Durgin’s book Dun Lady’s Jess, magic sends Carey and his courier horse from the world of Camolen to rural Ohio, changing his horse into the woman Jess in the process. Now, safely back at home in Camolen, Carey and Jess return to their work as couriers for Arlen, the Council Wizard of Anfeald Provence, and probe the relationship developing between them.

When a strange, twisted and corrupt magic appears and turns a segment of forest upside-down and inside-out, the Council of Wizards rushes to investigate, and are swiftly killed. The only surviving witness is Ramble, a palomino stallion. The sudden death of so many Council Wizards is felt by all the talented magic users, who believe the entire council to be dead. Yet Arlen is not dead, having been away on business at the time. But Arlen realizes that the slaughter of the Council may not have been an accident; and that as the only remaining Council Wizard, he may be the next target. His attempts to return home to safety are hampered when the travel booths stop working, forcing him to travel overland in disguise, but the slow travel gives him time to conduct his own investigation as the twisted magic spreads, causing magical meltdowns to appear all across Camolen.

Upset over the presumed death of his friend Arlen, the spreading magical/environmental devastation, and the inability of the secondary council to do anything, Carey seeks to find his own answers from the only source he has: the stallion Ramble, the sole survivor. He plans to use the now forbidden spell to send Ramble to Ohio, and thus make Ramble human. Jess, a horse who became human as a result of the same spell, knows what the experience will do to Ramble, and is dead set against it. But Carey does it anyway, breaking the trust between them.

In Ohio, Jess teaches Ramble-as-human to speak, and he tells her what he saw: nothing they didn’t already know. Carey isn’t satisfied, and interrogates Ramble himself, infuriating Jess, who demands that she and Ramble be sent back, out of Carey’s reach, immediately. But someone else knows about the trip to Ohio, and not knowing what the stallion may have seen, has sent their own people to Ohio to silence the stallion and anyone he spoke to. While back in Camolen, the twisted magic continues to spread, bringing death and destruction, and interfering with and corrupting other magic. Including the world travel spell that can take them home.

Dun Lady’s Jess is the first book in the Changespell saga.