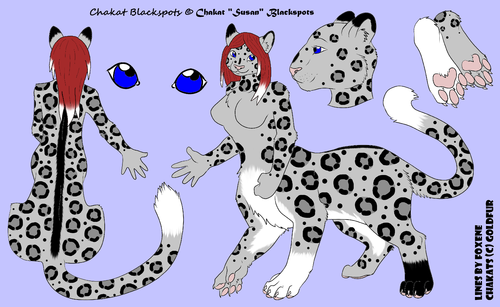 Blackspots has partially known about the furry fandom since late 2004 [1], but didn't really get into it until around Jan/March 2007 when he joined Second Life (as he forgot about it in between the intervening time from 2005 till about March 2007).

Blackspots's coloring resembles that of a snow leopard, however shi also has auburn hair with white highlights at the ends and the hair reaches down midway hir upper torso, and shi is fairly busty at a 36H. The tip of hir tail is white, she has one black paw on her left rear, her left forepaw is white, and shi has a white underbelly. Hir eyes are a sapphire blue color with flecks of green. Hir empath ability is at E3, and shi is working to improve hir ability.

Blackspots tends to prefer hir male side, but will happily partake in hir female side as well when needed. Shi is highly curious and affectionate, and loves to make new friends. Loves learning about space and its intricate details, yearning to go explore star nurseries and learn more about how they are formed.

In real life, Blackspots is generally a quiet reserved person who likes being in a crowd, but for the most part likes to try and make friends even though he tends to be shy around most women he doesn't know. He is straight, conservative, and a Christian (Baptist).

Blackspots has gone to the following conventions:

He is often found on Second Life, hanging out at Northstar, as well as his sim, Villiana. He also has been known to play World of Warcraft on the server Bloodhoof with the guild, Legion of the Claws.

He has also played on occasion CitiesXL, SimCity and Spore, though tends to get bored of it after a while. Other games he plays includes Star Trek Online, and rarely Skyrim