Chakat Avocado (Formerly human) is a LT. CMDR serving as a planetary exploration officer and has eventually transferred to Star Corps after 8 years. 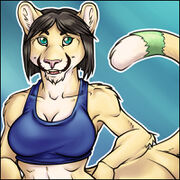 Chakat Avocado posing for the camera

Shi, or he was born on Terra, aka Earth on 2321 in California and has studied at one of it's various community college districts towards the sciences. At the age of 24, he decided it was time to go out of Terra and move to Chakona to start a new life as a new species. Of the many obstacles he faced and as he underwent the change via Oceanwalker process, shi now has applied to Star fleet academy after studying at Dewclaw University for four years and earned a bachelor in planetary science. As of now, shi resides on Chakona somewhere near Amistad by the Cat's Eye Pub owned and operated by Chakat Midsnow.