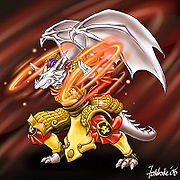 Cesarin as a Firebender, Inspired in the Cartoon Series from Nickelodeon "Avatar - The Last Airbender", Drawn by the artist FatDrake

Cesarin The White DraGoN is, by his description, a "pseudo" artist of furry artwork, and he is a former Burned Fur who lives in Mexico.

Cesarin discovered the furry community during the end of what he considers to be its Golden Age, around the years 1997-1998. He started drawing furry artwork during the first months of 1999 (one of his first drawings was of Ozone_Griffox). He continued to improve his artwork over the years, and finally received commission requests. He offers his artwork on several diferent websites and in the Rabbit Valley comic shop.

Cesarin is suposed to be clasified as a 'Non-anthro' White Dragon. He is still undefined in size but ranging from a tall Human's size, to 12 Meters tall with roughtly similar length in Wing-span. 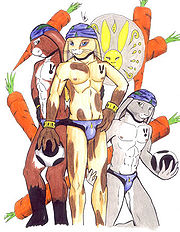 Cesarin's style is mostly "cutesy" and toony. His favorites creations are usually felines, bunnies and whatever huggable creature he may find cute. Most of his pictures are inked using a stylograph or fountain pen for inking maps.

Cesarin is on Second Life as Cesarin Chickenwing, As for September 21, His account as been Disabled thanks to the Security breach on Linden Labs. He can also be found on Counter Strike, in Team Fortress 2 and Left 4 Dead servers as -=SaRuMaN=-.