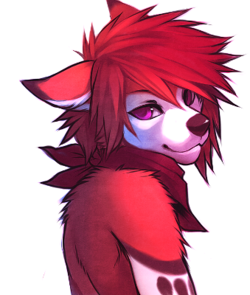 Cenny (formerly known as Centrix Lionheart) is a fursuiter who lives in Vancouver, British Columbia, Canada.[1]

Cenny was formerly a DJ at the Gay Furry Club on Second Life, where he played a variety of music.

Cenny's fursona is a husky with red-and-white fur with black pawprint markings on each buttock, red hair and purple eyes. He is always seen wearing a red bandana.[2]