Mindswipe (Cee Cee Reese) is a character in Extinctioners. Her first appearance was in Extinctioners Volume 2, Issue 1, in "Freedom" (story, pencils, and inks by Shawntae Howard; letters by Fender). 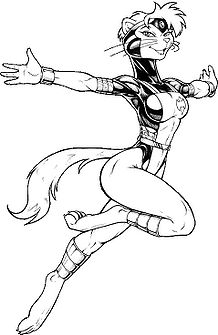 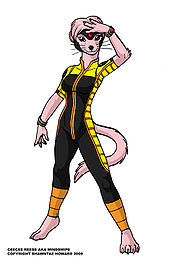 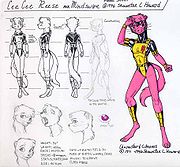 Living a simple life in the village of Chiar, Cee Cee lived a very sheltered and secluded life. Raised by her mother alone, her father long since abandoned them; Cee Cee learned early that life was tough. Very poor, her mother had to work hard to support and feed the both of them. But through it all nothing could break the special bond that they shared, that is until her mother suddenly took ill. It was a long and painful illness that tore Cee Cee apart, her mother was her world and she depended upon her heavily for emotional support. It was even harder on Cee Cee when her powers activated for the first time right at the moment when her mother was drawing her last breath. Cee Cee mentally experienced her mother dying and that would send her into a deep depression. It's no wonder when the Hunter robots came to her village that she didn't put up a fight.

It was in the slave camp where she met Walice Weazel, a male weasel, whom she would soon fall in love with and give birth to their son, William "Billy" Weazel. But he was taken from her in the night because he had taken ill, and she was told that he later died. Later Cee Cee would be used as a Mindswiper, a telepath that 'activated' the latent powers of others, a process that would cause her great emotional and physical pain. She would soon befriend Pandora Lee and together escape their prison cells. Eventually with Pandora and Walice, she would join Phenix in her crusade to free all of Alden from an oppressive alien influence.

Shawntae Howard claims that of all of his characters, Mindswipe is by far the most entertaining to write. Her character runs deep with problems we all face in everyday life. She's got what outside observers would consider a very bad relationship, but she's blind to the fact because she just wants to feel loved. Ironically, with her powers she could pretty much do what ever it is she wants, but she's too timid to use them aggressively in such a manner. The fact that she's also an artist gives Shawn the chance to write a character that parallels himself in hobby choice.