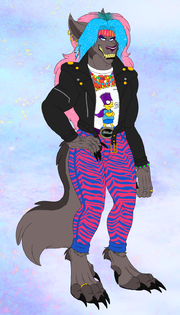 Cavity Sam began drawing at a very young age, and now uploads her artwork online, to share with others and further her skills. Cavity Sam's hobbies include drawing, writing, collecting, and costume making (including fursuits). Cavity Sam's main interests are pop culture, 90's Nickelodeon, animatronics, mascot costumes, advertising characters and restaurant history. She is passionate about the late-eighties McDonald's character Mac Tonight and The Jolly Olly Man from Hey Arnold!

Cavity Sam has three fursonas that represent different aspects of her personality. Her main fursona is Isabella Price (Belle). Belle is a 8' tall civilized scientifically created werewolf who lives on modern-day Earth in a world full of humans. Along with her close friends, she is an international musician who gained fame both for her music and clever "disguise". She can transform back into her 5'4" human form at will, helping her to fool the public into thinking her werewolf form is an animatronic stage costume.

Belle lives in a mansion in New York, with her band-mates Ramsely, Reggie, Warner, Amber, and Butch, along with her daughters Wednesday and Genevieve, her son Vincent, his wife Morella, their three children Gunther, Ricky, and Victoria, and friends Dr. Killjoy, Hex, Perci and Batticus. She also has four pets: a Bactrian camel named Mathayus, a Dromedary camel named Beni, a white-headed Capuchin monkey named Mr. Nilsson, and a talking science-experiment coyote named Walt.

Cavity Sam's second fursona is named Andrea Azaria (Andie). Andie is a bactrian camel living in the small fictional town of Fern Valley. Of all Isabella's fursonas, Andie is the closest representation of her, even sharing her first name.

Cavity Sam's main fursuit character is Cow, a cow who was built by Yvette Helin Studios.[2]

Cavity Sam's secondary fursuit character is Andie, a bactrian camel who was built by CantofTogs.[3]

Cavity Sam's third fursuit character is Kokomo, a lobster who was built by A Perfect Party.[4]