Vague (Catrina Fela) is a character in Extinctioners. She first appeared in Extinctioners volume 2, issue 3: "Countdown to Extinction" Part 4. The story and pencils were by Shawntae Howard, inks by Sara Palmer, and lettering by Carole Curtis and Fender.

Catrina Fela was the eldest kit of four, (with a fifth on the way), and was by far the wildest. Not liking the confines of authority, Catrina often found herself at odds with her parents, who she felt were trying to control her life. Also, being the oldest daughter meant she had more responsibilities because of her younger siblings and this only added fuel to the fire of her feelings of outside forces controlling her life. However, this would all change on the fateful night of the alien attack.

Without warning, the Fela household was attacked by soldiers, who were in search for Katherine because of her status as a hybrid. Brutally and without mercy the soldiers cut down Catrina's parents and baby sister, Cataline, in cold blood leaving her baby brother Tarens to fend for himself. Out of part desperation and part rage, Catrina attacked one of the soldiers, activating her hybrid powers of invisibility for the first time, and managed to successfully kill one of the guards before being subdued and captured.

Once in the hands of the aliens, Catrina, was given the choice of either becoming one of their slaves willingly or be killed. Out of fear she chose the former and became one of the alien's Hunters (one of the alien's top humanimal lead tracking/assault teams). She would be later freed by her little sister, Katherine, of their control and joined her and the others in their fight against the invaders of Alden, but she would forever wear the facial markings of a slave. 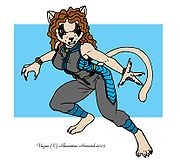 Shawntae Howard says that he can't take full credit for the creation of Vague alone. Vague's original concept was designed by a high school friend of his, L. Evans, who along with Shawntae would create animal super heroes and pit them against each other with the winner taking the character. The concept of changing her look and giving her a name and history was more of Shawntae's doing. He liked Vague and wanted her to be the sister of Katherine. Evans agreed and let him take the character, which Shawntae has since evolved and developed far beyond her origins. Her current look and character are all his own doing (hers since, like many characters, she seems to write herself). Vague originally wasn't even supposed to have made the Extinctioners' roster, but a certain Wolf and L!, convinced Shawntae otherwise.

Vague possesses the ability of Invisibility. This goes beyond just sight, her powers create a sound damping field around her as well kills any scent signals she may naturally give off, making her totally invisible to senses other than touch.