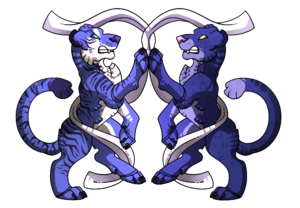 Catraxx, also known as Adin (born June 1983), is a furry musician, producer and disk jockey who lives near Wuppertal, North Rhine-Westphalia, Germany.[1] His fursona is an African leopard. Catraxx is a member of Blue Stripes.

The name Catraxx originates back to 2000-2001 when Adin started his first collaboration with Tambako in Ireland. The name is a simple combination of the words "Cat" and "Tracks".

Catraxx also had a presence to the international community within Second Life, as a DJ across several venues, including Club Culture, a simulated night club environment featuring live performances from DJs across the world. He is no longer active on Second Life.

Catraxx has a regular spot on German radio and runs a weekly dance music show 'Dance into Trance'. Catraxx produces and performs with fellow DJ and producer Micah.