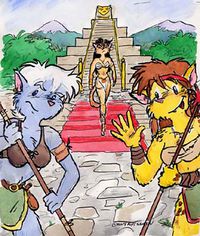 Catgirls Galore is an anthology which was published by Purrsia Press.

Boiled Spoons is also shown in another Purrsia Press anthology titled Catgirls Galore. This is similar to Bunny Babes, accept that all the stories in it are catgirl-themed. One of which is a reprint of Kurt Wilcken's 90s one-shot, Aztec Anthropomorphic Amazons about jungle catgirls, as well as a short story of the amazons Boo & Bastis. Other material included is Earn Your Wings where two catgirls try to become full angels, plus Neko-chan's Tiny World about a catgirl brought to life via a Weird Science-motif and now lives with her human creators. There's also a bonus chapter of Foxy's comic, The Life Of Nikuya, where an alien catgirl gets stranded on Earth.