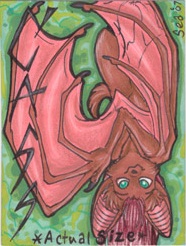 Cassandra Rising is a glass artist originally from New York, USA. She lives in England with her husband, Garr and many quadrupeds. She enjoys cooking, dog training, and playing with powertools, and will never turn down an offer of coffee, whiskey, wine, or spicy food. Her name is sometimes shortened to "cass".

Cass discovered the fandom in 2003 after reading a Something Positive comic satirising it. She attended her first Anthrocon in 2004, and returned in subsequent years as a vendor.

Cass's fursona is a Peter's Dwarf Epauletted Fruit Bat, a small variety of fruitbat. Her standard height is four feet, but she is often drawn as a micro between one and six inches tall. True to her species, she will pounce on any fruit available, but is partial to strawberries and blueberries. She is frequently silly, hanging upside-down by her toes and flailing at something just out of her reach. She also has an alternate character named "Silas", a grey male donkey with white markings. 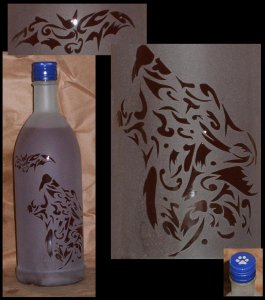 An example of Cassandra Rising's artwork

Cass uses a pressurized sandblaster to carve onto durable goods, usually glass, metal, and ceramic. She is probably best known for making custom drinkware, however she also produces purely decorative items such as mirrors and bookends. On occasion she also engages in other crafts such as cross stitch and felting.