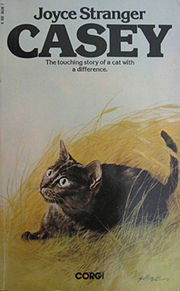 Front cover of Casey, as published in paperback in 1980 by Corgi.

Casey is a novel by Joyce Stranger. It was first published in 1968, by Harvill Press.

The title character is a green-eyed black cat. His father, Tartar, is a Siamese tom; his mother a farm cat named Midge. Other characters include a number of cows, horses, and dogs, as well as the human residents of Wayman's Corner. The story is told without dialogue, except for among the human characters.