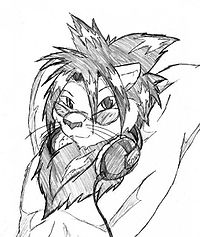 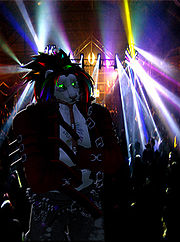 Carl Dana is a furry who lives in Burnley in Lancashire, England.[1]

Carl is one of the veteran furries on the game Second Life, having started playing in late 2005. For the first year, he spent his time wandering the game, learning how to use it and getting to know people. In around 2006, he started DJing at Rainbow Tiger, as well as working security at the club. From there, he wandered from club to club, taking up small gigs here and there.

For a period of 7 months, he worked as Head DJ and Senior Manager at the AnthroXtacy nightclub on Second Life, helping to manage the 50+ members of staff on the payroll. He is currently still a Senior Manager, after having stopped down as Head DJ due to burn out. He has three forms that he wears, the first being his main form, a large rainbow-maned lion. This avatar is unique in Second Life for having the largest mane in the gameworld, with 700+ flexi prims. He can also be seen as a rainbow-coloured phoenix and rainbow tiger (not affiliated with the club).