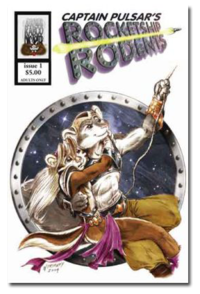 Captain Pulsar's Rocketship Rodents is an adult comic series written by Trejaan and drawn by Werepuppy. The series is being published by Rabbit Valley Comics. After appearing in FurNation Magazine issue 4 in 2003 would later appear in its own comic book series which ran from 2004 to 2008 with a total of 6 issues, and is considered a part of the Spooo Presents anthology.

The comic, which parodies '60s and '70s science fiction TV series such as Buck Rogers and Lost in Space, tells of the titular Captain and his all-male crew aboard the "Flaming Stingray" and their sexually-charged adventures in outer space politics and interstellar battles.

It is usually grouped with a spin-off series The Adventures of Professor Chronofur, a sexual parody of the BBC science fiction series Doctor Who, and is connected to the originating series as an actual television show that the "Flaming Stingray" crew highly enjoys.