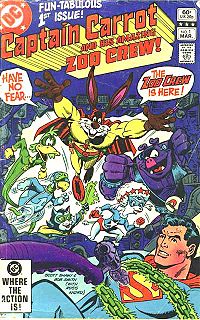 Captain Carrot and His Amazing Zoo Crew is a DC Comics comic book property about a team of funny animal superheroes called the Zoo Crew. It was published from 1982 to 1983, and was created by Roy Thomas and Scott Shaw!.

Although the series, which was the last original funny animal property created by DC Comics, proved shortlived, lasting only 20 issues, it is still fondly remembered in furry fandom, and the characters still appear occasionally in cameos in the DC Universe.

The various members of the Zoo Crew lived on a parallel Earth that, in DC's pre-Crisis days, was named "Earth-C." Earth-C consisted of a world where various anthropomorized talking animals existed; the series featured a lot of pun names for real-world aspects. For instance, the Zoo Crew operated out of "Los Antelopes, Califurnia," a parody of Los Angeles, California. Similar puns included places with names such as "Gnu York" (New York City), "Tallahatchee" (Tallahassee, Florida), "Cornada" (Canada), and the "United Species of America" (United States of America).

The president of Earth-C's version of the U.S. was "Mallard Fillmore" (a reference to 19th century U.S. president Millard Fillmore); other famous figures of Earth-C included "Liz Whaler" (Elizabeth Taylor), "Marlin Brando" (Marlon Brando), and "Byrd Rentals" (Burt Reynolds), the latter of whom became a member of the Zoo Crew.

Historical figures and events on Earth-C included the "Second Weird War" (World War II; Earth-C's version featured the U.S. and the Allies fighting the "Ratzis"), and President "Abraham Linkidd" (a goat, Earth-C's version of Abraham Lincoln), who was immortalized in the nation's capital ("Waspington, D.C.") at the "Linkidd Memorial".

Earth-C's population also consisted of the various "funny animal" characters that appeared in DC Comics over the years, particularly those in such Golden Age and Silver Age DC titles as Funny Stuff, The Dodo and the Frog, Real Screen Comics, and so forth. Indeed, several characters from these series made cameos during the run of Captain Carrot and His Amazing Zoo Crew.

Eventually, readers (and the Zoo Crew) were introduced to the parallel Earth of "Earth-C-Minus," which turned out to be the home of the "Justa Lotta Animals" (a parody of the Justice League of America) and whose world was an all-animal reflection of the mainstream DC Universe. (Captain Carrot, in his secret identity of Rodney Rabbit, is the writer/artist for the Earth-C Justa Lotta Animals comic.)

After the 1985 miniseries Crisis on Infinite Earths, it was stated that Earth-C and Earth-C-Minus were actually "alternate dimensions" rather than parallel Earths, and thus were spared from the effects of Crisis. More recently, the miniseries The Kingdom presented Earth-C as a Hypertime reality.

In 1986, the Zoo Crew crossed into the realm of classic literature when they were caught in the middle of the "Oz-Wonderland Wars" (DC Comics). At the end of that adventure, the Inferior Five appeared and it can be assumed the Zoo Crew went off to help them, though their published exploits end at that point.

In Teen Titans #30-31 (December 2005-January 2006), the Zoo Crew made their first return appearance in some time, in stories presented as excerpts from a comic book story, "Whatever Happened To Captain Carrot?", that a character in the "real" DC Comics universe is reading in #30. In these stories, we see that the Zoo Crew has mostly disbanded and live in a somewhat "darker" world than the one of their prior adventures. Little Cheese has been killed, Fastback has disappeared, Captain Carrot is in self-imposed retirement after the death of a former partner, the secret identities of Alley-Kat-Abra and Yankee Poodle are now public knowledge, and Pig-Iron and Rubberduck are operating as costumed heroes in secret. The story is a parody of the "grim and gritty" trend most often identified with late 1980s to 1990s superhero comics,including references to several of DC's own series (such as The Dark Knight Returns and Watchmen, including the "cover" of the Captain Carrot comic bearing a distinct resemblance to the cover of Watchmen #1). In the end, after sending Alley-Kat-Abra to jail for murdering Little Cheese (her motive being that cats hate mice), Captain Carrot and the remaining Zoo Crew return to action with a new member, the last American Eagle, on their way to retrieve Fastback from the future (where Alley-Kat-Abra had banished him).

It is unknown as of yet whether the events of Infinite Crisis will have any effect on Earth-C or the Zoo Crew.

The origin of the team came about when Superman was investigating a strange phenomenon causing the citizens of Metropolis to begin acting like their primate ancestors. He soon found a ray streaking at him from a strange barrier surrounding the Earth, which prompted him to use a meteorite as protection. When the ray struck the meteorite, Superman and the meteor's fragments were sent from Superman's native dimension into Earth-C. There, Superman met several of the world's residents, who had gained superpowers when they were struck by the various meteor fragments.

The animals and Superman soon teamed up to stop the source of the ray (which was also causing the denizens of Earth-C to behave like their non-anthropomorized animal ancestors), which turned out to be the old Justice League villain Starro, a sentient starfish, who was launching his de-evolution assault from the Earth-C universe's Pluto. After defeating the villain, the animals decided to stick together and form the Zoo Crew, and Superman returned home.

The members of the Zoo Crew include:

In the story in Teen Titans (current series) #30-31, other deceased Earth-C meta-animals named include Carrie Carrot (a rabbit presumably with Captain Carrot's superpowers), Giant Giraffe, Hoppy the Marvel Bunny, Ballistic Baboon, Snurtle McTurtle, Amazing Ant, and Power Panda. These may or may not have been former Zoo Crew teammates in that story's version of Earth-C.

Enemies of the Zoo Crew include: