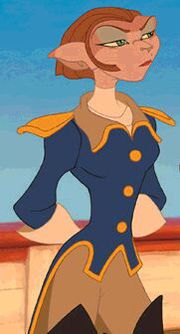 Captain Amelia is a character in the 2002 Disney film Treasure Planet. She is based upon the character of Alexander Smollet, the captain from the original Treasure Island. In the Disney film, the character is a female alien of unknown species with distinct feline qualities.

Captain Amelia was voiced by Emma Thompson in the 2002 film. Her role in the film is the captain of the ship sponsored by Dr. Delbert Doppler, a close friend of Jim Hawkins' mother, who organised the expedition after Jim came into possession of a mysterious artifact which appeared to be a highly advanced, three dimensional holographic map to a vast treasure trove. Captain Amelia captains the R.L.S. Legacy, the initial prefix of which is a tribute to Robert Louis Stevenson, the original author of Treasure Island.

Captain Amelia is depicted as a feisty, no-nonsense character who prefers to run a highly organised and disciplined ship. Her dislike of the cutthroat, low-life crew hired by the oblivious Dr. Delbert Doppler is immediately apparent, keeping the map under lock and key for the duration of the voyage (until removed during a mutiny). She possesses a blue naval coat typical of French seagoing captains in the 15th century and wears a tricorn naval hat.

Captain Amelia is not known to have made appearances in any other movies or media outside of fan-art. However, it is possible that she made an appearance in the video game Treasure Planet: Battle of Procyon, given that she mentioned her involvement directly.

Captain Amelia's species is unknown, although she displays distinctive feline qualities. She is shown leaping between ropes, masts and sails with ease and being hardly bothered by falls of a significant distance, alongside the sound of a cat's meow in the background as she lands. She also displays strength beyond her seemingly frail form when wrestling the wheel during a supernova (when a rather bulky, male crewman is seen thrown away by its force) as well as an impressive proficiency with the 'flintlock' rifle shown in the movie.

At the conclusion of Treasure Planet, Captain Amelia is strongly implied to have given birth to a litter of children which bear a striking resemblance to both herself and Dr. Delbert Doppler. The two share a romantic link so this seems probable. However, according to a few lines from the end of the movie that were cut due to the idea of male pregnancy being too risqué to put in a children's movie, it was apparently Delbert who gave birth to the kittens and puppy. The film does not show any mention of her pregnancy.

In the wallpapers and photos of Treasure Planet, Amelia's hair was changed black due to error, when Treasure Planet was almost finished. In the original movie her hair was orange instead of black