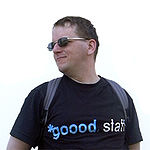 Cap (born 1972 in Bremerhaven, Germany), is a cartoonist and fursuiter who lives in Germany. His name comes from his being a fan of the Disney animated feature The Fox and the Hound. The German name of Todd, the Fox, is "Cap". The name "Todd" sounds in German like "dead," so he chose the German version for his nickname.

He is a big fan of the german Scoccer Team Werder Bremen. His knee surgery in November 2007 doesn't allow him to play sports like soccer or snowboarding anymore.

The first furry convention Cap attended was Eurofurence 5, Berlin 1999. The largest one was Anthrocon 2001. Since Eurofurence 9 in the Czech Republic he prefers more small cons or private parties. He was one of the first attendees of Keepiru's ZillerCon.

Cap's fursona since the early 90s is a non-morphic red fox.

Cap likes to draw female anthropomorphic animals since 1995. In the year 1998 he uploaded his first artwork to the VCL archive. After building up his first homepage in 2000, he registered a Fur Affinity account in November 2006 for his newest works. Since 2012 his fur (tf) art is also on Inkbunny

His main tools are color pencils and paper. After the scan process he use simple digital effects. Most of his artwork includes adult content. He is also a transformation artist.