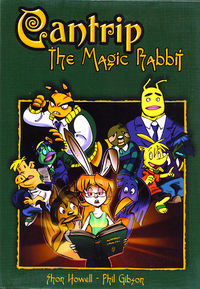 Cover of the Cantrip the Magic Rabbit trade paperback.

Cantrip the Magic Rabbit is a furry webcomic by Shon Howell and Phil "Poinko" Gibson. The plot concerns the strange things that are afoot in the sleepy town of Templarsville, Oklahoma.[1] The students at Julius Schwartz Memorial High are abuzz with rumors about the new girl, Candice Tripp.