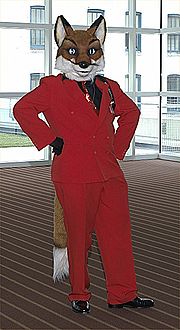 Camstone in Red Business Suit at Anthrocon in 2007

Camstone Fox is a red fox fur who lives near Washington, D.C., United States. His wife is MooiVos (Dutch for "pretty vixen") and they have been married since late 2004. He was widowed in 2003 when his previous wife, Jenna, succumbed to complications related to diabetes. He is a father as of December 2007, but the rest of his family is not interested in attending furry events at the present time.

Camstone is a fursuiter with being a regular attendee of AC, MFF, MFM, FtM and RCFM (now disbanded), since 1999. He started the Northern Virginia Fur local group email list - or NoVAFur and in 2010 - passed it on to other members to run. He has also participated as a panelist and moderator for Furry Scientists, Furry Christian and professional panels at various conventions, and speaks on a regular basis on topics related to his employment as a researcher, inventor (currently holds one US patent, with another pending), scientist, integrated/systems engineering manager, and program manager. He became aware of the fandom later in life, and with over 20 years being part of it - he now considers himself a greymuzzle. Camstone other hobbies and avocations include film & digital photography, competing on horseback in 3-day eventing, computers (main to micro, including the Internet of Things), woodworking, model rocketry & railroading, bartending, and judging at national, state & local science fairs.

In 2007, Camstone was selected as the RCFM art show chair and became programming chairman in 2008. He was inducted into the RCFM Mission Control Board of Directors after their convention in 2008, but resigned before the convention in 2009, stating employment and schedule conflicts. Since 2014, the terms of his current employment prohibit him from serving on any convention outside of general attendee, panelist, or sponsor.

Camstone is often depicted as an anthropomorphic Scottish Red Fox with his whiskers waxed & combed into the shape of a long mustache and had it coined as the term "whiskerstache" by a dear friend. He sometimes wears a tam o'shanter cap, tartan kilt, and a sporran. Alternately, and as perhaps best known, he wears a red business suit or Zoot suit. He has been depicted with both plantigrade and digitigrade legs. He has had cameo guest appearances in the webcomics Projection Edge, Mountain Poutine and The Suburban Jungle.